In a joint project, the film manufacturer POLIFILM EXTRUSION and the self-adhesive materials specialist HERMA have succeeded in initiating a genuine recycling stream for matrix – the ladder-like waste that arises during the production of film labels. “In practice, this means that we are recovering a film product and returning it to the production cycle in the form of a high-quality recycled material. The method we are applying also allows the adhesives in particular, as well as the customary printing inks, to be processed,” says Jens Kölble, who is Head of Packaging & Performance Films at POLIFILM. “In the initial phase we are using the recycled material in the production of construction films. Mixing in a small quantity does not impose any restrictions whatsoever as regards either functionality or processing.” According to POLIFILM, groundwork on further film applications is already taking place. The actual quantities of matrix that can be processed at present remains small, however, because a market has yet to be established. Until now there has not been any economically viable or ecologically acceptable recycling solution for PE matrix waste. As a rule, the matrix enters the “thermal recovery stream”, otherwise known as incineration. Label printers pay a lot of money for this form of waste management; prices stand at around 150 to 200 euros per metric ton. “Apart from the costs, simply destroying precious raw materials cannot be a sensible option from a sustainability perspective. We are always keen to highlight ways of bringing about a circular economy and further reducing the ecological footprint of labels,” comments Dr. Ulli Nägele, HERMA’s Head of Development.

Weighty challenge
Matrix waste is created wherever labels are die-cut from a web of label stock. Depending on the shape, size and arrangement of the labels in the web, substantial quantities can arise. And the roll of stripped waste naturally accommodates just as much material, measured in running metres, as the label roll that is subsequently placed in the labelling machine. Although exact figures are not available for the quantity of PE matrix produced worldwide, HERMA has estimated that European converters currently generate around 7,300 metric tons of this waste annually.
Matrix recycling, as implemented now by POLIFILM, is for the time being limited to PE label film stock. But as Dr. Nägele confidently predicts, “It’s only a matter of time before a similar approach is adopted for PP films as well. In the case of PE films we were certain from the outset that pooling our adhesive skills with POLIFILM’s expertise in the recycling and manufacture of films would quickly give rise to workable results.” POLIFILM had already proven its partnering credentials when schäfer-etiketten and HERMA joined forces to develop a PE label, regarded as the first of its kind worldwide, consisting entirely of post-consumer recycled (PCR) material. Even the masterbatch containing the white pigment is a PCR PE product. For a similar project utilising 50 percent PCR and 50 percent industrial PE waste, the three companies were awarded the German Packaging Prize in the sustainability category in the autumn of 2019.

Brief profile of HERMA
Located in Filderstadt near Stuttgart (Germany), HERMA GmbH is a leading European specialist in self-adhesive technology. In the 2019 fiscal year the HERMA Group generated sales of around €364.4 million in its three divisions with 1,097 employees.This announcement was first published by HERMA GmbH. We would like to take this opportunity to thank HERMA GmbH for the excellent cooperation.

This announcement was first published by HERMA GmbH. We would like to take this opportunity to thank HERMA GmbH for the excellent cooperation. 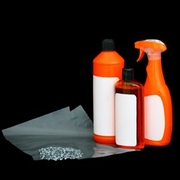