After being awarded the "Großen Preis des Mittelstandes", POLIFILM is now receiving two further awards for the Weißandt- Gölzau site, within the scope of the "best of the year" by the "Industrie- und Handelskammer" (IHK) Halle-Dessau. During this event, the best graduates of the current examination year will be rewarded for training and further education.

Out of a total of 3,269 candidates in the IHK region, Michael Gutenev, process mechanic for plastic and rubber technology at POLIFILM EXTRUSION GmbH, was one of the few who passed the final examination with at least 92 out of 100 possible points. Due to this outstanding performance, he was deservedly awarded as one of the best of his year.

It should be pointed out that Mr Gutenev carried out a shortened apprenticeship, where he learnt the curriculum of the 2nd and 3rd year of teaching at the same time. POLIFILM is proud of employees like Mr Gutenev and will continue to support him and reward his commitment, as best possible, on his further professional career path. Fittingly, there is a second award from the IHK.

POLIFILM EXTRUSION GmbH has received this for special services in vocational education. With approx. 60 apprentices, the Weißandt-Gölzau site is also one of the biggest training organisations in Central Germany, and offers approx. 20 young people per year the opportunity to learn an exciting skilled trade.

The distinctions by the IHK took place on 2 November 2017, at the Georg-Friedrich-Händel-Halle in Halle/Saale. During the ceremonial event, IHK President Carola Schaar and Prof. Dr. Armin Willingmann, Minister for Economics, Science and Digitalisation in Saxony Anhalt amongst others, gave their congratulations. 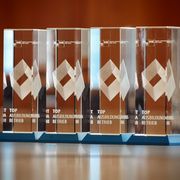 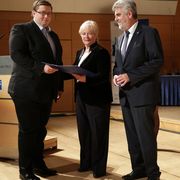 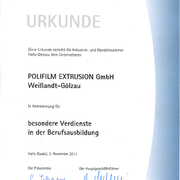