POLIFLEXX reNate is the logical consequence of the bio-based stretch film POLIFLEXX Green in the sustainable stretch film range of POLIFILM EXTRUSION. Using the name POLIFLEXX reNATE, the company from Weißandt-Gölzau places its first polyethylene-based (PE) machine stretch film with post-consumer recycled content, abbreviated PCR.
The film, available in thicknesses of 20 and 23 µm, contains up to 30% post-consumer-recyclate (PCR) and convinces with a maximum prestretch of 200% on all common winder types. "With reNATE, we have succeeded in developing a stretch film that despite its recycled content meets the high requirements, especially in terms of stretch and puncture resistance." says Hikmet Kalkan Head of the Industrial & Agricultural Films Division POLIFILM EXTRUSION, alluding to the special challenge of using recycled material in stretch films.
"In recycled materials, the polymer sequences are shorter than in virgin material, which can affect the function of the film. With reNATE we have taken this into account and created a balanced formulation with an ideal mixing ratio, which allows us the use of up to 30% PCR without affecting the usual quality," continues Kalkan.

The standard version of the machine stretch film, 500 mm wide, functions as pallet wrapping as well as load unit securing and is the solution for environmentally conscious and safe stretching. In fact, the recyclate used comes from processed plastic waste from end users. At the same time, the film itself is 100% recyclable due to its PE base and thus fits into the picture of the recycling economy. 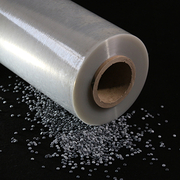