What sounds like a typo is rather a new process for generating high-quality recyclates. Newcycling® describes the method  by the plastics granulate specialist APK to recover regranulates from post-industrial polyamide/polyethylene composites (PA/PE) using solvents. POLIFILM tested the Mersalen® PE granulate for non-food applications. The result: a success.

In combination with virgin PE, POLIFILM application engineers were able to use the Mersalen® to produce a film that is characterized by a high poverty of spots. This is a real improvement when it comes to the use of regranulates, which have had up to now often a negative effect on the optical film appearance. Mersalen® is different. POLIFILM was able to use the regranulate - in the middle layer - to create good transparency, which qualified the resulting films for printing and laminating.

That is different about the methode
The Newcycling® process makes it possible to physically generate high-quality regranulates from PA/PE composites. In the past, the industrial waste from these composites, such as that produced in the production of cheese-packaging, was usually sent for thermal recycling, but now it can participate in the circular economy cycle.
For this purpose, the PE is separated from previously mechanically comminuted PE/PA composite waste by selectively acting solvents at temperatures around the melting point. While the other film components remain undissolved, the PE falls out and can be separated from the foreign matter. This takes place on a macromolecular level, which - unlike chemical recycling - eliminates the need for cost- and energy-intensive polymerisation for granulate production.
The entire process is illustrated here.

POLIFILM sees this as a further option for the partial replacement of virgin PE with recycled material on the way to improved sustainability without compromising quality.

Discover at K 2019
Until October 23rd you also have the chance to get a picture of the POLIFILM film at the K 2019 in Dusseldorf. Visit APK in hall 8b booth C43. 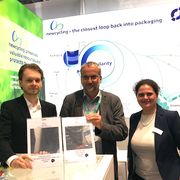