As a founding member of the German initiative called ERDE, POLIFILM EXTRUSION GmbH makes an annual contribution to the reduction of greenhouse gas emissions by participating in the well thought-out recycling system for agricultural plastics. Together with other manufacturers, over 28,000 t of greenhouse gas emissions were saved in 2019 by collecting and recycling used silage and agricultural stretch films. This is comparable to the amount bound by more than 2 million trees in Europe every year. The initiative thus exceeded its success from the previous year.

For comparison: In 2018, the amount of greenhouse gas emissions saved was almost 19,500 t, which corresponds to the binding capacity of approximately 1.4 million trees. Therefore, the association of manufacturers, collectors and recyclers has recorded an increase in emission savings of around 44%, and has thus achieved a two-fold success for climate protection. Because the concept of film collection and recycling does not only save greenhouse gases. It also actively counteracts the environmental littering caused by plastic solutions.

POLIFILM EXTRUSION is pleased to have been committed to the responsible use of recyclable materials from the very beginning. What is special: At POLIFILM this is located close to the base.  At POLIFILM EXTRUSION the Sales Manager for agricultural films, Mr. Christian Schröder, is proud to be an active member of the board of directors of the ERDE initiative. "Being directly involved in a project is extremely motivating. Just like knowing that the end of life cycle of the solutions you are selling is the starting point for new products".
POLIFILM EXTRUSION has been producing fully recyclable PE films for agricultural applications for decades, including agricultural stretch, silage and greenhouse films. By participating in ERDE, the product characteristic "recyclable" is attributed an even more far-reaching significance, because support for uncomplicated implementation is directly included - and, according to POLIFILM EXTRUSION, this will continue in the coming years.

Under the umbrella of IK Industrievereinigung Kunststoffverpackungen e.V. and in cooperation with RIGK as a system operator, ERDE organises the separate recovery and eco-efficient recycling of used agricultural films made from PE-LD (fraction 1) and PE-LLD (fraction 2) across Germany through collection partners. Agricultural services companies and farmers collect their crop plastics and take them – swept and cleaned of significant dirt – together to a collection point. The collection price is defined by the collection point directly. Recycling companies then process the collected material into new plastic raw materials. 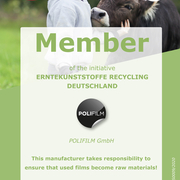 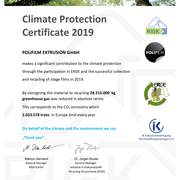 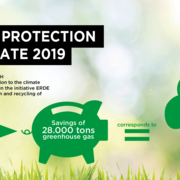