For improved visibility shielding and theft prevention, all types of POLIFILM manual stretch film can be obtained in the standard colours black and white. It is also possible to dye film with other colours according to the colour reference catalogue. Depending on the application, POLIFILM equips the manual stretch films with one smooth side.

Manual stretch films in accordance with standards for food are also available from POLIFILM. 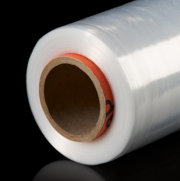 More than 10 per­cent of all hand films are dis­card­ed due to dam­age. We’ve put a stop to that! POLIFLEXX has rein­forced edges and is wrapped softly to pro­vide per­fect pro­tec­tion even if han­dled with less care.