POLIFILM PROTECTION, a global leader in surface protection films, has further enhanced the performance of its renowned CO₂ and fibre laser protective film, by developing a new flow-optimised adhesive formulation and modified carrier film. The result is a protective film that effectively prevents bubble formation during the initial laser piercing, specifically in complicated applications and difficult processing conditions.

Perfect adhesion of the protective film is essential for a clean cut and total protection of the surface. This is particularly important during the initial process as the laser pierces the material. If there is insufficient adhesion the cutting gas that is forced in under the laser pressure cannot easily escape and instead collects between the protective film and the metal surface. As a result blisters form which interfere with the focus of the laser beam and the targeted gas flow. This can result in poor quality cut edges and in some cases increase the risk of rejection of the cut product.

It is therefore crucial that the risk of blister formation is prevented which is exactly what POLIFILM PROTECTION has achieved with the evolution of its classic PF 584C laser protective film. The new PF 584 C S (with innovative SOFT formulation) eliminates blister formation thanks to a natural rubber adhesive with improved flow properties and excellent wetting characteristics. It penetrates even more effectively into different surface structures, thus ensuring secure anchoring. The film adapts exceptionally well to the substrate and guarantees perfect adhesion.

“The improved viscoelastic behaviour of the new adhesive provides our modified PF 584 C S laser protective film with the necessary adhesion to prevent the film from bubbling, especially at the critical moment of piercing, even on rough or structured surfaces”, explains Thomas Mähner, Head of Development at POLIFILM PROTECTION. The same improved performance also applies during other unfavourable cutting conditions, for example if the sheet is not at the optimum processing temperature or if film is stretched from too much pretension during lamination. The PF 584 C S film also considerably reduces the risk of blister formation during time consuming cutting processes, for example when cutting thicker metal sheets or poorly absorbent materials such as aluminium also, when using less powerful laser cutting machines.

To further improve performance POLIFILM PROTECTION has also optimised the carrier film. The carefully selected raw materials ensure the film is even more homogeneous.  This is crucial for the effective performance of the protective film as unevenness in the film can lead to damage to the metals surface when force is applied, such as when the sheets are folded, formed or stacked.

“By further developing our universal laser protective films for CO₂ and fibre lasers, we are once again offering our customers an innovative solution that gives them considerable practical day-to-day advantages. Not only are we ensuring even more precise and burr-free cutting, but we are also contributing to even higher production efficiency and waste reduction. Our customers achieve the highest quality at reduced costs”, says Mähner.

(Note: This product is not available for the US market) 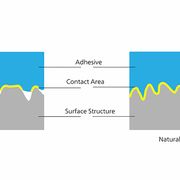