New portfolio of protective films consisting of three application specific film technologies addresses all of the key challenges of the market.

POLIFILM PROTECTION introduces a new range of laser protective films for thin sheets up to 0.8 mm thick which are sensitive to bending, such as those frequently used in the manufacture of household and commercial appliances, as well as consumer electronics. Three laser protective films for thin sheets are now available. The different application specific characteristics of each film mean the majority of production requirements are met.

Thin sheets are easily shaped and are well suited to laser processing. They are just as indispensable for manufacturers of domestic and commercial appliances – such as dishwashers, fridges, microwaves and toasters – as they are for producers of computer cases or electronic housing. However, being so thin, such sheets can easily become deformed during the manufacturing process, for example when applying or removing protective films.

To address these issues, POLIFILM PROTECTION has developed a range of special laser protective films for sheets of up to 0.8 mm thick. A special adhesive formulation provides a perfectly tailored adhesive strength ensuring easy unwind and ease of application without causing any undue stress to the protected sheets. This guarantees optimal conditions for subsequent processing steps. The films can be quickly and easily removed partially or completely, without damaging the sheet or leaving any residues therefore eliminating the need for any reworking.

All three of these laser protective films for thin sheets have one thing in common: they guarantee efficient, bubble free laser cutting with edges that are clean, smooth and burr free no matter how complicated the cutting pattern. The films precisely controlled adhesive strength also ensures they stick reliably to the surface to be protected throughout the entire machining process.

Each of the three laser protective films have additional exceptional properties that make them the ideal solution for their particular applications. For example, the versatile grey “universal” laser protective film PF582C for thin sheets excels as a reliable all-rounder. It can be used with both fibre and CO2 lasers, is tear resistant and flexible, and delivers high-quality results, even under challenging manufacturing conditions.

The second laser protective film, PF82C, for thin sheets means manufacturers no longer have to limit cutting speed when working with fibre lasers, even when cutting complex patterns. The film therefore significantly accelerates the production process, improving efficiency. This is possible because POLIFILM PROTECTION has specially engineered the film’s absorbency to match the fibre laser wavelength thereby ensuring that almost 100% of the energy of the laser is converted to heat.

The third protective film, PF32C, is also unique. It is the first highly transparent protective film for laser cutting thin sheets using fibre lasers. Its transparency enables visual inspection of the workpiece at any time without removing the film. This solution prevents costly mix-ups during production and ensures that any defects and quality flaws can be quickly recognised and dealt with. This highly transparent film thus reduces the rejection rate and ensures consistent quality.

“The development of our new laser protective films for thin sheets brought all our expertise in adhesive and film formulation into play. We are proud to have once again developed a special solution adapted to the particular demands of an important customer market segment. After all, our identity and reputation as a global leader in protective film is built on finding solutions to such problems and that is what distinguishes us from the competition,” explains Thomas Mähner, Head of Development at POLIFILM PROTECTION’s production and development site in Germany. 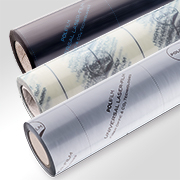 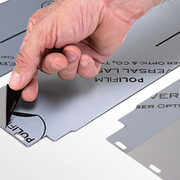 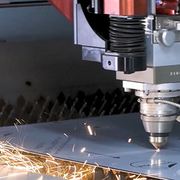