With the PF84C, POLIFILM PROTECTION, a leading manufacturer of protection films, has developed a new Universal Laser Film. Thanks to their unique formulation, it is the first such film which allows fibre optic laser cutting of stainless steel without any restriction in speed. Now, Aluminium can be processed significantly faster as well.

PF84C from POLIFILM PROTECTION is not just a protection film which shields sensitive surfaces from scratches or sparks during the process of laser cutting. This film is not just suitable for both CO₂ and fibre optic lasers. PF84C is much more. When used in the process of a fibre laser cutting, it accelerates the cutting process significantly without compromise, like no other solution today.

This is all made possible by a special film formulation developed by POLIFILM PROTECTION and tested by the Fraunhofer Institute. When using common laser films, a reduction in cutting quality at higher speed occurs. Such films actually slow-down faster fibre laser machines. In contrast, the PF84C features special additives which enables 100% absorption of the laser beam, allowing these machines to perform at their highest possible speeds; leaving all other laser films behind.

For the processing company, this means that their fibre lasers can be operated at full speed even when processing the most demanding cutting geometries and patterns. Pre-cutting is not required. The cut lines are clean and smooth without showing any signs of burring. Rework and wastage is reduced significantly. Much the same can be said for Aluminium which has a much lower absorption rate. However, POLIFILM PROTECTION successfully increased this rate by 50% with the PF84C.

PF84C Universal Laser Film has an optimum adhesion level; no occurrence of bubbling during piercing and cutting, easy to remove without residues or tearing, all performance characteristics optimise process efficiency. Additionally, thanks to its six-month UV stability, the recyclable PF84C can remain on the surface during extended processing and installation.

“Manufacturers of laser cutting machines have confirmed these positive characteristics to us,” says Thomas Mähner, Head of Development at POLIFILM PROTECTION. “Furthermore, it has turned out that the outstanding cutting performance of the PF84C contributes to less contamination of the laser nozzle, thus reducing cleaning intervals and increasing productivity.” 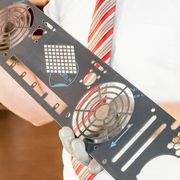