19th October at the Ho Chi Minh City Military Hospital - under strict corona conditions, a series of events started and will extend for 1.500 km towards Hanoi. The Israeli Embassy supports organizations in Vietnam with medical expertise, from counselling to donations. The POLIFILM Group contributes to the latter. In close co-operation with the official bodies, the two companies belonging to the POLIFILM group, POLEG PLASTIC INDUSTRIES and POLIFILM Vietnam Co. Ltd., coordinate the shipment and application of POLIFILM's antiviral films in selected facilities at POLIFILM’s expense, including the training and commissioning of local teams to apply the films provided.

The aim of the film is to reduce the spread of a variety of pathogens, including the SARS-CoV-2 virus, through transmission via surfaces. For this purpose, the films are equipped with a silver ion technology that eliminates up to 99.9% viruses but also fungi and bacteria on surfaces. "In addition to the effectiveness against the Corona virus, the latter is particularly interesting for hospitals," says Matthias Szappanos, Managing Director POLIFILM Vietnam.

Mr. Szappanos further explains "The films are also active against a number of antibiotic-resistant bacteria, the so-called hospital germs." When applied to frequently touched surfaces, patients and people whose immune systems are already weakened by illness should be less exposed to further sources of infection. Therefore, the antiviral films are applied in hospitals and medical facilities in Vietnam, where they are already applied to handrails, lift buttons and even snack machines. "Wherever people share and touch objects, the films contribute to improved hygiene," comment Avi Niv, CEO of POLEG, the manufacturer of the films. For this reason, the Vietnamese Bank of Vietnam also decided to have these films applied by POLIFILM at various ATMs in Hanoi and Ho Chi Minh City.

The company group provided a total of 750 rolls of 25 m length of the self-adhesive films, which corresponds to approx. 5.200 square meters of protected surface. The campaign was initiated by POLEG's cooperation with the Israeli Embassy in Vietnam. "Through our sister company in Vietnam, we knew about the serious extent of the pandemic on site and wanted to help. This led us to contact the Israeli Embassy in Vietnam. Thanks to the extremely professional and results-oriented cooperation, it was only a short period of time before the project was realised. For this, I would like to thank everyone involved on behalf of POLIFILM," concludes Mr. Niv. 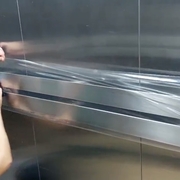 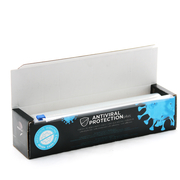