“Even under these high levels of irradiation, after a year and a half these films could still be removed just as easily as when they were brand new” explains Thomas Mähner, head of development of POLIFILM PROTECTION's German production and development site. “Our tests prove that in countries with intense solar radiation, the films can remain on the surface for up to 18 months; in western European climates this can even be up to 24 months. This makes it an ideal solution for a wide range of customers. It reduces the number of complaints and minimises the time and expense needed for reworking. Furthermore, global manufacturers of architectural components now only need a single film solution to use in all their markets because these films can be used anywhere in the world, no matter what the climatic conditions on site". 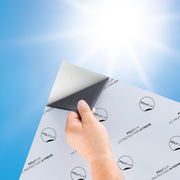