More and more consumers are becoming concerned about the climate and placing importance on sustainably manufactured products with minimal environmental impact. Which is why POLIFILM PROTECTION have developed a new generation of bio-based protective films, made predominantly from renewable raw materials. Customers can already demonstrate their commitment to the environment by opting for these protective films.

Thanks to their outstanding adhesive properties and excellent puncture, tear and abrasion resistance, bio-based protective films from POLIFILM PROTECTION provide reliable protection for sensitive and valuable surfaces, such as plastics, metals or glass throughout manufacturing and subsequent processing operations. They can be processed efficiently and offer the same UV protection as their regular polyethylene counterparts.

At the same time, they boast an impressive climate footprint: each tonne of Green PE locks away three tonnes of atmospheric carbon dioxide, cutting carbon emissions by around 60% compared to traditional PE films. Not to mention that bio-based protective films from POLIFILM PROTECTION are fully recyclable.

“With our bio-based protective films, for the first time we are offering our customers films based on renewable raw materials”, explains Thomas Mähner, head of development of POLIFILM PROTECTION's German production and development site. “Anyone who uses these films to protect their products will also be improving the carbon footprint of their own business and showing their customers their active commitment to climate action. They can rely on the uncompromising quality and performance they have come to expect from our protective films: no ifs, no buts". 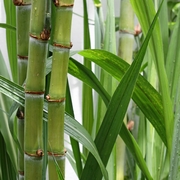