About the film solution
The room-temperature-laminating polyolefine (PE or PP) film is intended to open up new processing fields for laminators, online printers, as well as label producers. The film creates permanent and stable composites, used for instance to produce stand-up pouches, without thermal lamination or adhesive connection, thereby simplifying the process considerably. Instead of heat or adhesive the film bonding relies on a chemically-mechanically connection activated by a Corona treatment.

The benefits
From an economic point of view, this reduces the complexity of the processing procedure, the necessary investment of laminating tooling as well as the time-to-market. At the same time sustainable benefits are offered, like less energy consumption and therefore less CO2-emissions, optimized recyclability of the packaging as no non-polyolefine glue is added.

About World Star Award
Since 1970, the World Packaging Organisation has been organizing WorldStar awards and providing awards to numerous packs from all around the world. The WorldStar Competition is one of the major events of the World Packaging Organisation (WPO) and is the pre-eminent global award in packaging. WordStar illustrates the continual advancement of the state of packaging design and technology and creates a living standard of international packaging excellence from which others may learn.  Each year WPO is recognizing the best of the best in packaging innovations from across the globe. 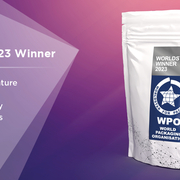