At the beginning of this year, POLIFILM EXTRUSION GmbH announced the acquisition of SAXA Packaging GmbH in Neukirchen/Pleiße. As part of the integration process, the company was re-named with effect from 01.06.2021.
From now on, SAXA Packaging GmbH will operate under the name POLIFILM Neukirchen as the second German subsidiary of the film extrusion specialist POLIFILM EXTRUSION, alongside POLIFILM Osterburken GmbH. 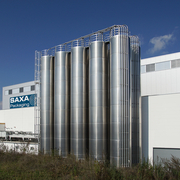